MVF’s fourth distribution will bring all participating victims to a 66.85% recovery.

$302.8 million will be committed for 12,007 victims subject to collateral recovery contingencies.

$108.3 million of payouts represents reissuance of funds from prior uncashed checks.

MVF is pleased to announce that we have commenced our fourth major distribution (“D4”). MVF is paying $469.6 million in cash to 25,307 victims, some of which represents reissuance of uncashed checks for various reasons. D4 brings participating victims to a total recovery from all sources of 66.85% of each victim’s fraud losses.

As part of D4, MVF committed an additional $302.8 million for 12,007 victims waiting for legal resolutions of their potential collateral recoveries, bringing total committed funds to just over $1.1 billion. Resolving how much can be paid to these victims, and how much must be disallowed, is now one of our most important tasks. Most of these victims invested in Madoff Securities through investment vehicles that have not distributed bankruptcy recoveries to their underlying investors (or have made only a partial distribution), or have other unique collateral recovery uncertainties.

MVF was created in 2013 to distribute funds forfeited to the United States Government to victims of the Madoff fraud.  In the 63 months since MVF’s claim filing deadline, 41,509 petitions from victims of the 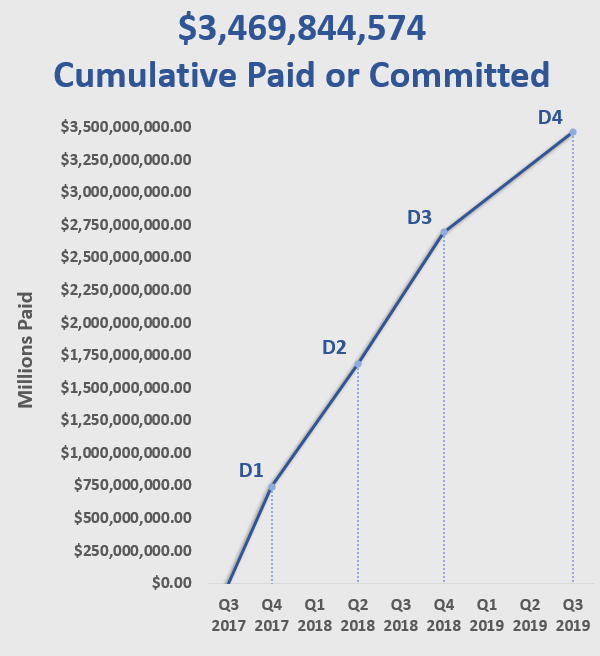 Madoff fraud have been approved by the U.S. Department of Justice (the “Department”). Approximately $2.4 billion has been paid to nearly 32,000 victims,1 almost all of whom invested in Madoff through one or more investment entities before their funds reached Madoff.

The Department of Justice and MVF have been clear in our goals to 1) compensate as many victims of Madoff’s fraud as possible, and 2) narrow the gap in recoveries among all victims. Substantial progress has been made in meeting both goals, although the work is not finished. Our guiding principle has been simple – any person whose own funds were actually invested in Madoff and were lost as a direct result of the fraud should be eligible for compensation.

Over 25,000 victims have now recovered 66.85% of their losses, which is a level of recovery significantly greater than what we projected when we began this process. Even better, there will be more victims receiving checks in the future, and the recovery level will rise even more as all of the commitments and reserves are used or paid to victims.

In November of 2017, 43 months after MVF’s claim filing deadline, MVF’s first payout (D1) brought 21,530 victims of the Madoff fraud to a recovery of 25% of their fraud losses.  More than half of the victims receiving payments in D1 had never received any payments through the Madoff bankruptcy or from any other sources.  Most of the other victims participating in D1 had previously received less than 10% in recoveries before receiving their D1 payment from MVF. 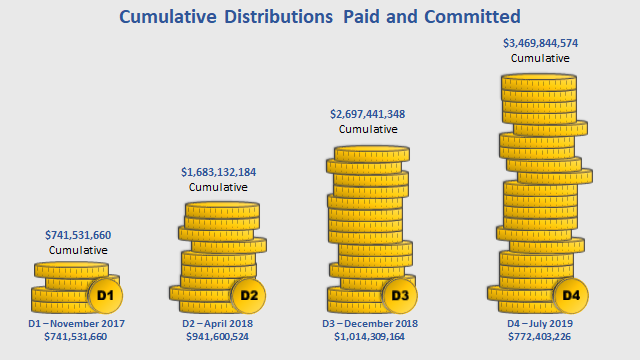 In addition to the nearly 32,000 victims who have already received cash payments, MVF has committed funds for approximately 12,000 victims who invested through certain investment funds that (i) are in litigation with the bankruptcy estate; (ii) are involved in protracted liquidation proceedings and related litigation not involving the bankruptcy estate; or (iii) have unusual divergences in reported collateral recoveries among investors. MVF has committed enough funds to bring each of these additional victims in the held vehicles to the same 66.85% recovery in the event these issues can be resolved. That said, any distributions from MVF to these victims must be consistent with applicable laws and regulations governing the remission process.

MVF has paid or committed funds for 37,346 victims totaling $3.5 billion during the past 20 months.

MVF refers to the sum of (i) cash payments; (ii) committed funds; and (iii) future payment reserves as its “Obligated Funds”. As the chart below demonstrates, MVF has now obligated just over $4 billion of the overall assets. We estimate that after D4 is complete, MVF will have unobligated funds of slightly over $51 million. 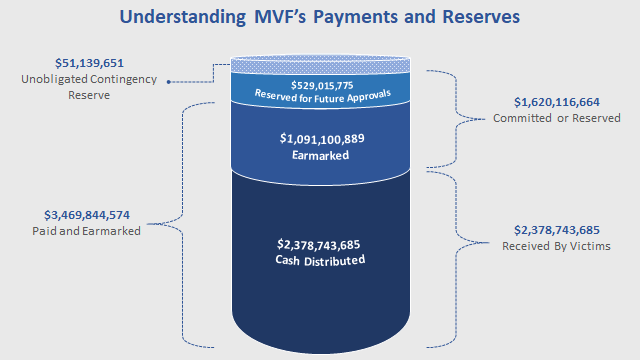 In accordance with MVF’s Plan of Distribution (the “Plan”), each distribution is structured to provide progressively higher “baseline” percentage recoveries for all victims. One can think of these baselines like the staircase illustrated in the graphic below. In making payments to individual victims, MVF computes the amount that is necessary for each victim to achieve MVF’s baseline recovery percentage when all prior recoveries are included. In a sense, we provide a “rising tide” that lifts all victims to progressively higher percentage recoveries. 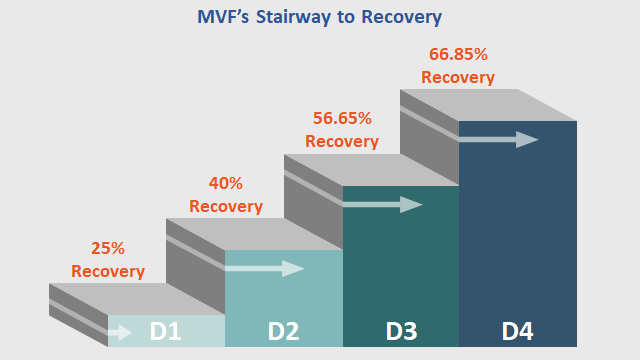 MVF tracks actual recoveries to all 41,459 approved victims through our collateral recovery update process. These statistics let us measure exactly how much each victim has received, as opposed to what might have been paid to the investment vehicle through which they invested. The collateral recovery updates show that many MVF victims have actually received far less than was paid out to their investment funds, and that the overall recoveries are not evenly distributed across all victims.

26,250 approved victims, or over 63% of all MVF approved claims, have had total recoveries of less than 10% of their losses from sources other than MVF.

Another way of explaining these reported collateral recoveries is that over 97% of total bankruptcy and other receipts reported to MVF have been received by roughly 37% of Madoff’s victims, while 63% of the victims have received less than 3% of the payouts.

At the opposite end of the spectrum, 2,449 victims, or 5.9% of MVF’s total victims, have reported receiving more than 70% of their fraud losses from sources other than MVF. In total, this group has received 59.5% of total victim recoveries reported to MVF.

Roughly 6% of victims report recoveries of more than 70% of their losses from sources other than MVF, representing 59.5% of all non-MVF recoveries.

These recovery statistics underscore the process that MVF and the Department established at the outset of this process – every dollar from MVF is paid directly to the victims and not through intermediaries. It also shows the importance of our baseline payout process to even out recoveries. 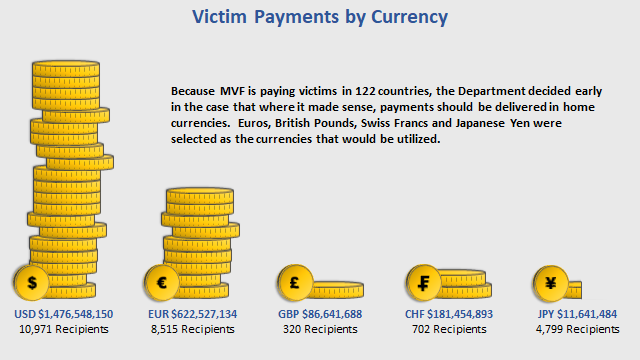 We hope that by now all victims appreciate why MVF requires periodic updates of a victim’s collateral recovery amounts. As we have described on this website previously, this can be done by simply clicking the button shown below to generate a form that can easily be submitted to us. Before each distribution, all victims who may be eligible to participate must either certify that 1) they have not received any recoveries, 2) they have not received new recoveries since prior reports to MVF, or 3) they have received new recoveries of a specific amount. In any of these cases, victims must certify to the accuracy of these updates under penalty of perjury as was true with the original claim. The update process is very simple, and it lets MVF calculate the correct payment amount for each victim.

If you have not updated your collateral recoveries after April 1, 2019, then you will not receive a check in D4 until we receive an update from you. Please call us immediately if you have an issue in providing an update. This is the same process that we have followed prior to each distribution, and it makes overall payments fair to every victim.

Please remember, failing to update your recoveries makes your original petition – filed under penalty of perjury — incomplete. Falsely certifying that you have not received any additional collections would constitute a false statement under U.S. perjury laws and is a criminal offense.

MVF and the Department are currently evaluating more than 1,700 Requests for Reconsideration (“RFR”) or other “pending” claims that raise unique eligibility issues that have not yet been resolved. MVF holds just over $529 million in reserves to pay all of these claims that are ultimately approved by the Department. This number has been reduced by approximately $700 million since December 2018, and we anticipate continued reductions in this future payment reserve as remaining claims receive final action.

MVF’s ability to make future payments will depend on the timing and amount of final action on all remaining pending claims, RFRs, and resolution of the holds that have led to committed funds. MVF expects a further significant reduction in RFRs and pending claims throughout the balance of 2019.

When a pending claim or an RFR is approved, a portion of our future payment reserves will go to paying the newly approved claim. The balance, after taking into account collateral recoveries, will be released to fund more payments to every victim. Similarly, as claims or RFRs are denied, the entire previously reserved amount becomes available for an increased payout to all victims.

Based on our experience, we know that our reserves will only be partly used to fund newly approved claims, and other amounts will become available to pay all other claims. MVF also believes that a number of the held vehicles will be resolved in coming months, which will also result in the release of some committed funds.

We hope that the funds distributed in D4, as in our prior distributions, significantly benefit those whose money was stolen and their families. Our work to increase payout percentages for victims will continue, and we are committed to updating you on our progress.

All of us at MVF are thankful that we have had the opportunity to deliver billions of dollars to victims worldwide. We will continue to do everything possible to make a positive difference in the lives of every Madoff victim.

[1] Of these approved petitions, slightly more than 3,150, or 7.6%, have recoveries to date from all sources that are greater than MVF’s 66.85% payout level. These petitions will not participate in a distribution until MVF’s payout percentage reaches what these victims have already received.

Click here to view the Press Release from the U.S. Department of Justice announcing the fourth MVF distribution.