Participating Victims will be brought to a 73.65% recovery of their Madoff fraud losses 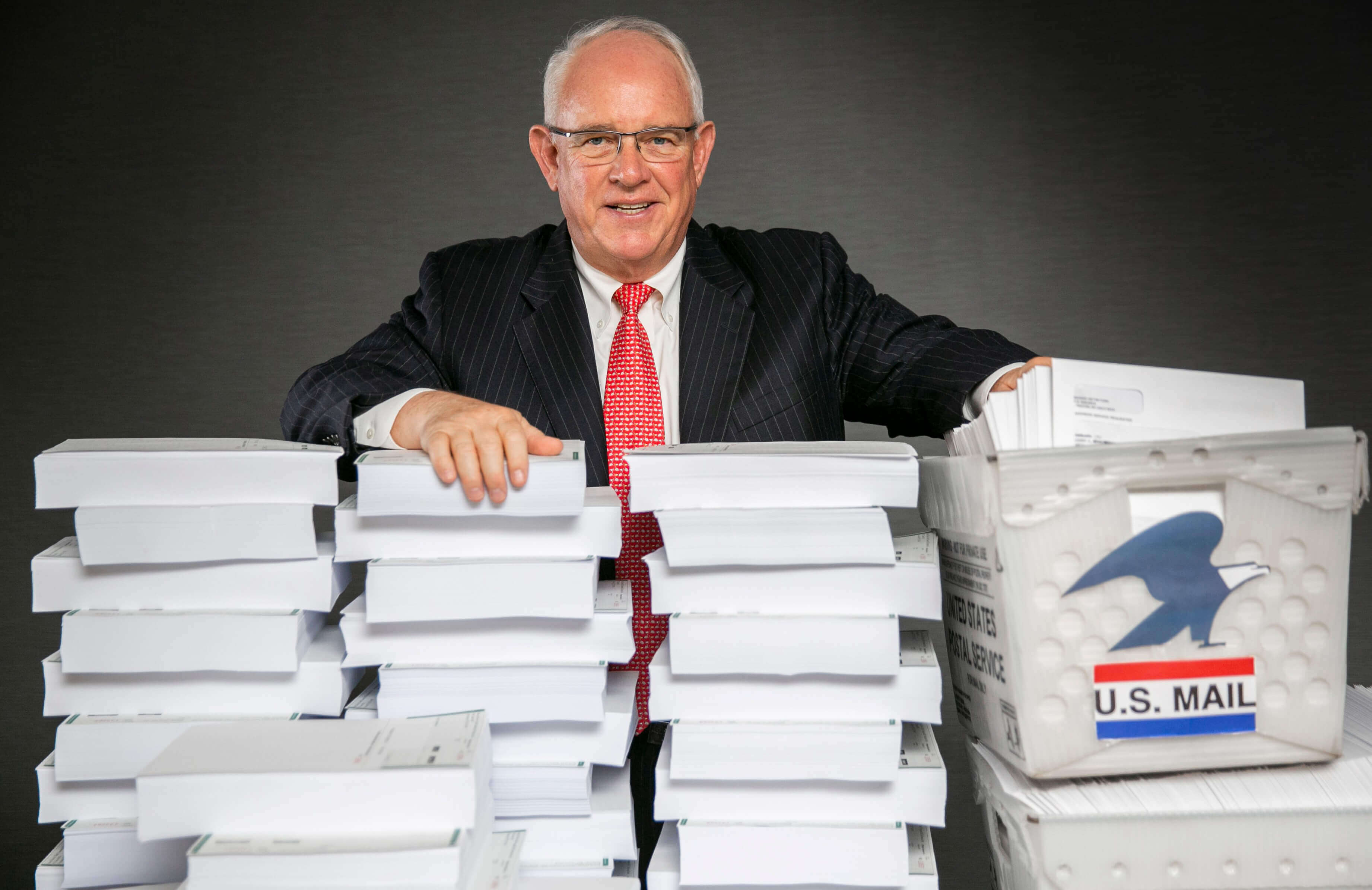 “All of us at MVF are delighted to be able to distribute funds to Madoff victims during this profound healthcare crisis.  Cash recoveries are always important, and this new round of payments will provide immediate and quite meaningful help to MVF approved victims in an hour of pressing need.  Everyone at MVF, some of whom are shown above, has been dedicated to getting this payment out to victims notwithstanding the limitations of the current situation.”

MVF was created in 2013 to distribute funds forfeited to the U.S. Government to victims of the Madoff fraud.  In the 71 months since MVF’s claim filing deadline, MVF has recommended, and the U.S. Department of Justice (“DOJ”) has approved, 42,115 claims in connection with the fraud scheme at Madoff Securities.  Prior to approving these claims, MVF evaluated more than 500,000 individual investment transactions by victims, and millions of pages of documentation, to trace and verify billions in investor cash channeled to Madoff Securities through more than 1,200 individual investment firms around the world. 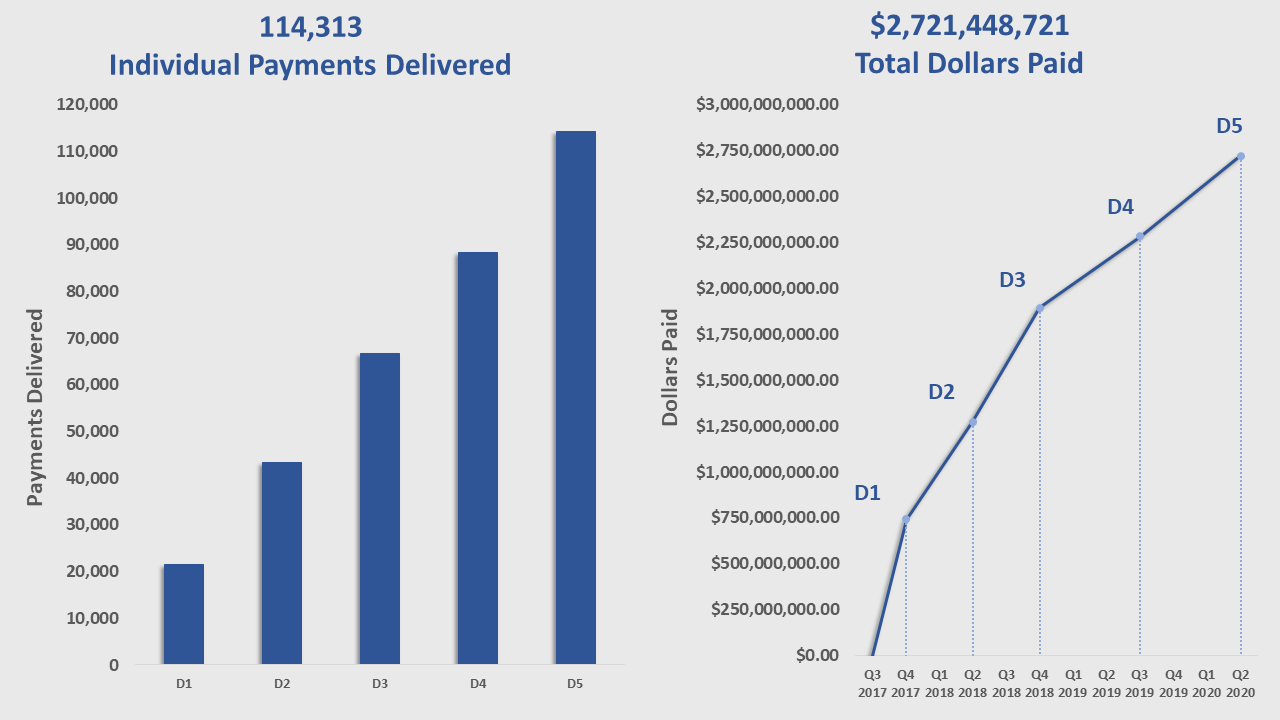 In November 2017, MVF’s first payout (D1) brought 21,530 victims of the Madoff fraud to a 25 percent recovery of their fraud losses. More than half of the victims receiving payments in D1 had not previously received payments from any other sources. Most of the other victims participating in D1 had previously received less than 10 percent in recoveries before receiving their D1 payment from MVF.

Since D1, the number of victims receiving checks in D5 increased to 26,045, a 21 percent increase from D1. In addition, D5’s recovery percentage of 73.65 percent is nearly three times the initial payout of 25 percent. Distributions now total over $2.7 billion paid to 32,634 victims, or almost $100 million per month since payouts began 29 months ago. When earmark reserves are included, MVF has paid or committed just over $3.6 billion to 37,817 victims in that same time.

The chart below shows each of MVF’s five distributions: 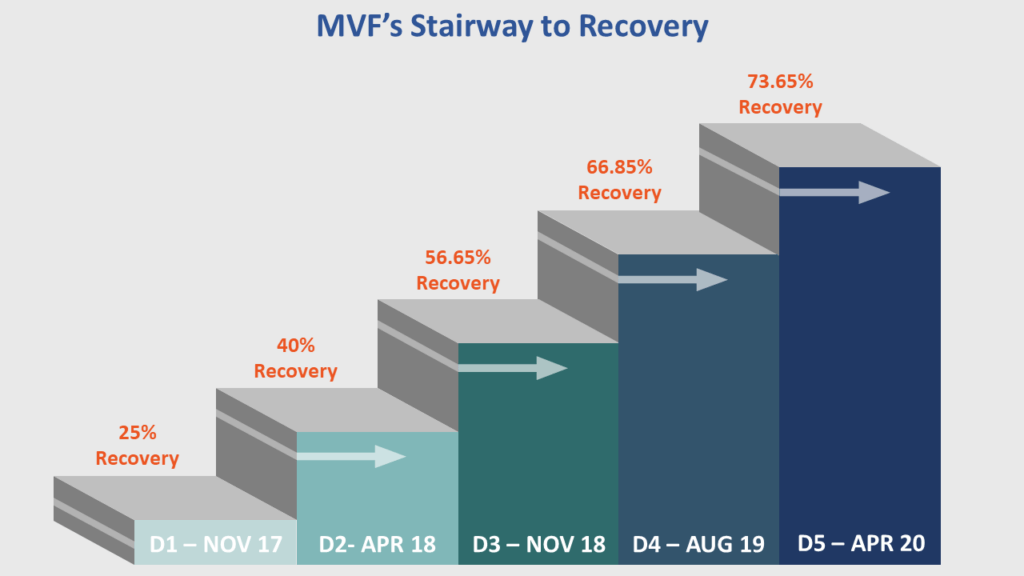 The recovery record is underscored by the process that MVF and the Department established for payments at the outset of this effort. Every dollar from MVF is paid directly to the victims, and not through intermediaries. It also shows the importance of our baseline payout process to even out recoveries among victims.

The Department of Justice and MVF have been clear in our goals to 1) compensate as many victims of Madoff’s fraud as possible at the highest possible recovery percentage, and 2) narrow the gap in recoveries among all victims. Substantial progress has been made in meeting both goals, although the work is not finished. Our guiding principle has been simple – any person whose own funds were actually invested in Madoff and were lost as a direct result of the fraud should be eligible for compensation.

The chart below shows the current allocation of MVF’s cash following D5. 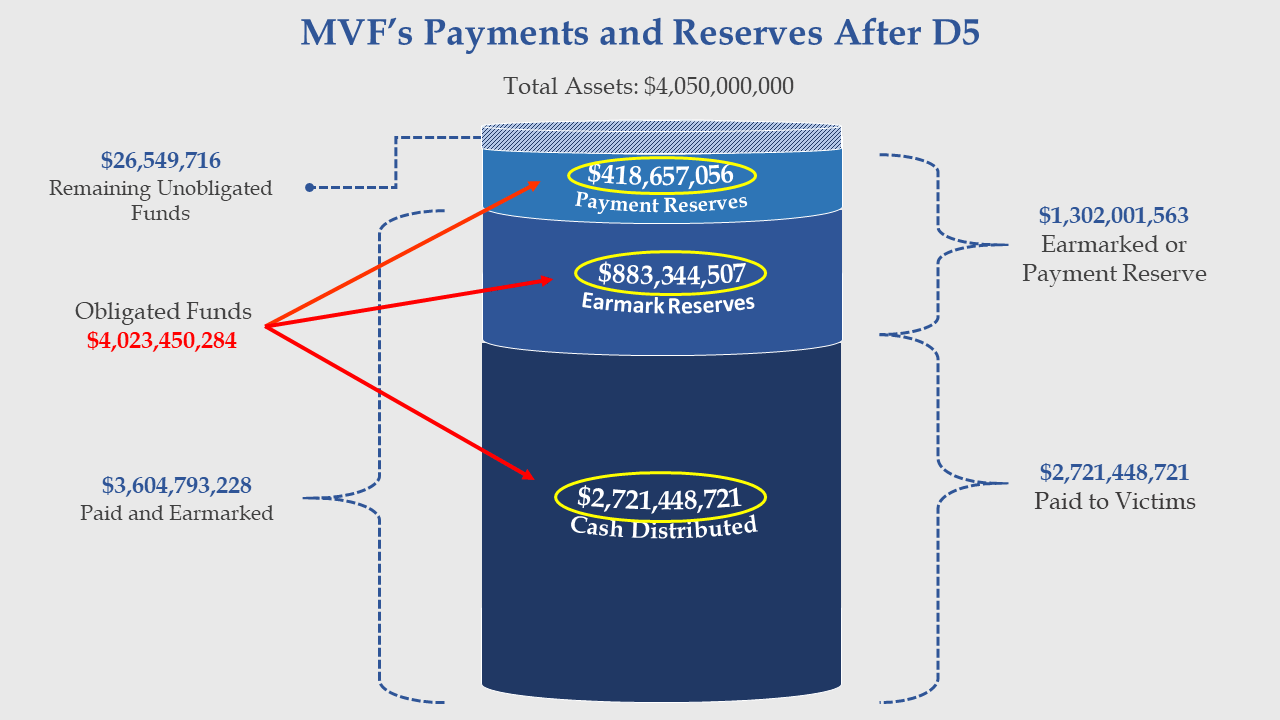 Unobligated Funds. At the end of D4, MVF had paid or reserved all of its funds except for $51.1 million that remained free for immediate distribution. Subsequently, collateral recovery updates and other adjustments increased that amount of available funds to approximately $86 million.  Approximately $60 million of this distributable cash was used in D5.

Payment Reserves. At the end of D4, MVF held $529 million in reserves for potential future payments on newly-approved petitions or requests for reconsideration (“RFRs”).  Since D4, MVF and DOJ approved approximately 500 of these petitions and RFRs.  This released approximately $110 million of these reserves as either catch-up payments for newly approved petitions, or increased recovery for all victims.

Earmark Reserves. At the end of D4, MVF held earmark reserves of $1.091 billion to be used to pay up to 12,007 petitioners who invested through 21 “held vehicles” or have holds for other reasons.   As described in MVF’s Summer 2019 Update, the investment vehicles subject to vehicle holds “(i) are in litigation with the bankruptcy estate; (ii) are involved in protracted liquidation proceedings and related litigation not involving the bankruptcy estate; or (iii) have unusual divergences in reported collateral recoveries among investors.”  Each of those situations prevents MVF from accurately calculating investors’ past or anticipated collateral recoveries as required by applicable regulations governing the remission process. 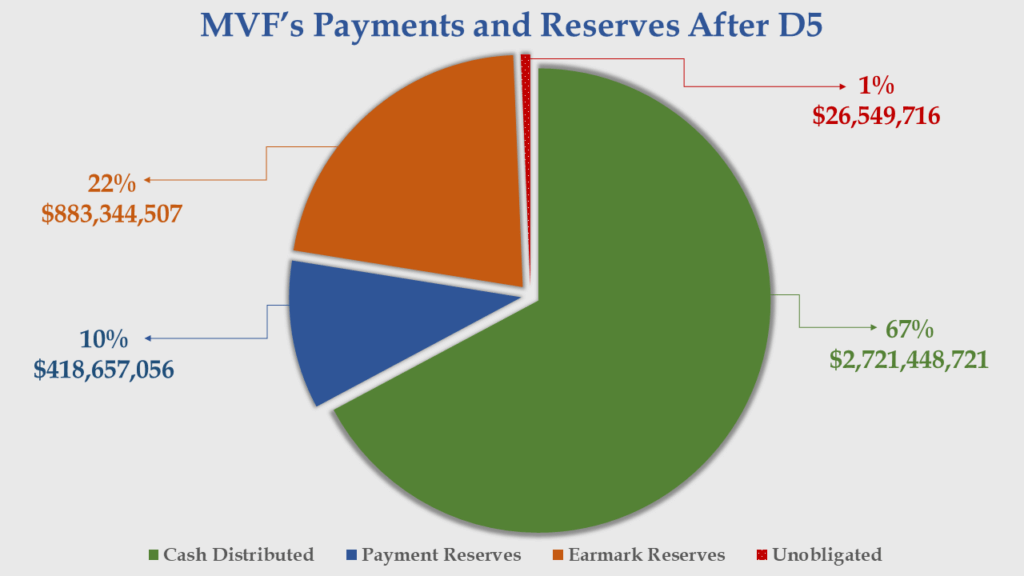 MVF received sufficient information after D4 to calculate the collateral recoveries of approximately 2,400 petitioners who invested through seven of the 21 held vehicles. Consequently, DOJ released approximately $208 million of the earmark reserves in D5 to pay those petitioners, and to fund additional payments to all victims.

Beyond approving release of funds relating to these 7 vehicles, DOJ also evaluated the appropriate level of earmark reserves covering petitions through the 14 remaining held vehicles without sufficient collateral recovery information.  After review, DOJ determined to halt any new earmarks, and to reduce existing earmark reserves by approximately $70 million.  MVF now has $883.4 million in earmark reserves for 8,246 petitioners.

Going forward, DOJ and MVF will continue to hold earmark reserves in anticipation that some, if not all, of the remaining held vehicles will resolve outstanding issues that are preventing MVF from determining collateral recoveries.  That said, DOJ cannot delay completion of its own process without hurting other victims.  To ensure fair and timely recovery for approved victims with complete claims, DOJ retains discretion to reallocate the earmark reserves further. Therefore, finalizing distribution of collateral recoveries should be a priority for anyone involved with the held vehicles.

All victims must provide periodic updates of collateral recoveries to MVF.  This can be done by simply clicking the button shown below to provide the necessary information.  Before each distribution, all eligible victims must certify that: 1) they have not received any recoveries; 2) they have not received new recoveries since prior reports to MVF; or 3) they have received new recoveries of a specific amount. In each of these circumstances, victims must certify to the accuracy of these updates under penalty of perjury.  The update process is simple and allows MVF to calculate the correct payment amount for each victim.

If you have not updated your collateral recoveries after January 1, 2020, then you will not receive a check in D5 until we receive an update from you. Please contact MVF immediately if you have an issue in providing an update. This is the same process that we have followed prior to each distribution, and it makes overall payments fair to every victim.

Please remember, failing to update your collateral recoveries makes your original petition – filed under penalty of perjury — incomplete. Falsely certifying that you have not received recoveries would constitute a false statement under U.S. perjury laws.

The timing of future MVF distributions will depend on final action on remaining pending petitions, RFRs, and resolution of vehicle holds.  MVF will continue working to resolve RFRs and petitions throughout the balance of 2020.  We also anticipate that earmark reserves will continue to be drawn down through collateral recoveries, release of vehicle holds, and other DOJ action.

We sincerely hope that the funds distributed in D5 will significantly benefit every recipient in this time of increased uncertainty due to the global pandemic.  Completing this distribution under difficult circumstances reflects MVF’s continuing commitment to doing everything possible to make a positive difference in the lives of every Madoff victim.

Click here to view the Press Release from the U.S. Department of Justice announcing the fifth MVF distribution.

Explore The Global Scope of MVF

MVF Claims by US State