The Madoff Victim Fund and the U.S. Department of Justice Announce the First Payout of Approximately $772.5 million to 24,631 Madoff Victims

The Madoff Victim Fund (MVF) has commenced the first distribution of more than $772.5 million to 24,631 victims of the Madoff fraud using funds forfeited to the United States;

Approximately $227 million is also being paid to 8,100 victims who have recovered more than zero, but less than 25%, of the approved losses in their petitions (“low recovery victims”). The low recovery victims will receive an amount equal to 25% of their fraud losses less the amount of their prior recoveries; and

As provided in MVF’s Plan of Distribution, the first distribution will ensure all approved victims have recovered at least 25% of their fraud loss amount. 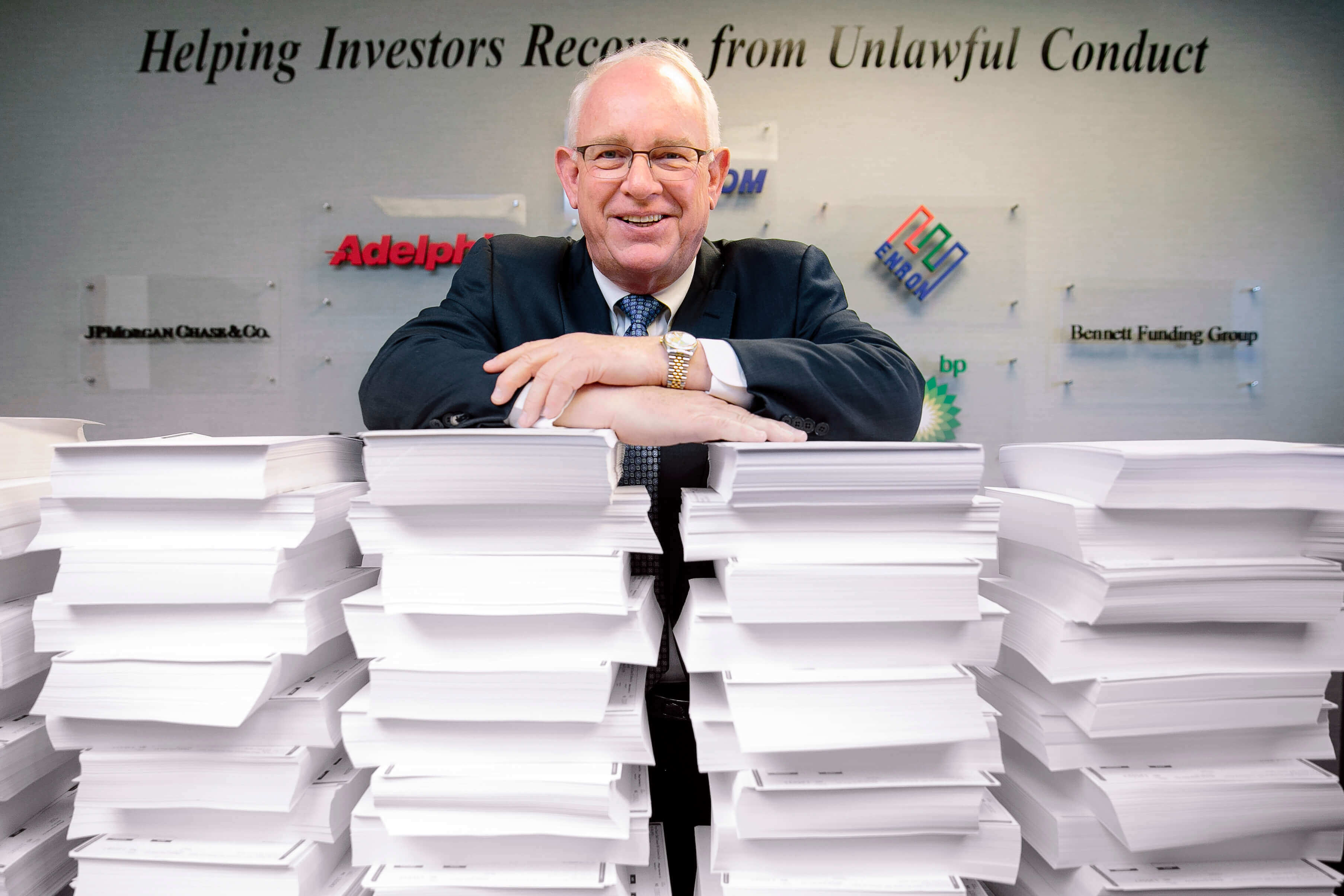 Special Master Breeden with the checks for MVF’s first distribution.

“The Madoff Victim Fund is an unprecedented effort to identify and compensate directly tens of thousands of investors all over the world whose money was stolen in the Madoff fraud. The entire team at MVF is proud of our work to deliver on the Department of Justice’s commitment to help the victims directly injured in this fraud, no matter how or where their money was stolen.”

MVF is pleased to announce that it has commenced its initial distribution of funds forfeited to the United States Government in connection with the fraud at Bernard L. Madoff Investment Securities. MVF is paying approximately $772.5 million to 24,631 victims of the fraud whose petitions were approved by the Money Laundering and Asset Recovery Section in the U. S. Department of Justice (DOJ). Losses for these petitioners were calculated in accordance with the MVF Plan of Distribution (the “Plan”) previously approved by DOJ.

Recipients of MVF’s first payout live in 49 States, the District of Columbia and in 119 countries outside the United States. The initial distribution will be completed in phases over approximately the next three weeks.

Payment Recipients by US State

First Payments for more than 16,550 Victims

MVF has received petitions disclosing prior recoveries ranging from 0% to over 95% of the claimant’s fraud loss. This MVF distribution will help reduce the enormous disparity between victims who have already recovered a significant portion of their losses, and those who have not participated in prior recoveries. In this initial payout, MVF is paying over a half-billion dollars to more than 16,550 victims who have confirmed to MVF that they have not previously recovered any of their losses in other proceedings.

The zero recovery victims in the United States include State and local government entities, nearly 30 schools and universities, 32 religious and health care charitable groups and nearly 40 pension and retirement plans of both multi-employer labor union groups and private employers. Many other similar charitable groups or retirement entities outside the U.S. also will receive their first recoveries on their Madoff losses. In addition to the United States, there are large groups of zero recovery victims in many foreign countries.

Bringing Every Victim to a Minimum Baseline Recovery

In accordance with the Plan, MVF’s first distribution is structured as a “catch-up” payment that will bring every victim with a payable petition approved by DOJ to a “baseline” recovery of 25% of their eligible fraud loss.  MVF’s Plan, first published in 2013, provides for:

“…an initial round of payments to bring all victims up to some minimum baseline percentage recovery of loss, such as 25%, before making any payments to victims who have already received more than that amount. We will then make further rounds of payment with an objective of leveling out recoveries among all eligible victims until MVF’s resources are fully distributed.” See Madoff Victim Fund frequently asked questions (“FAQ”) #20 (“How will distributions be made?”).

This approach of bringing all victims to a minimum percentage level of recovery reflects the enormous disparity in the treatment of Madoff victims.  Indeed, MVF has over 700 claims from direct accountholders who have already reported recovering over 80% of their losses, and over 250 claims from victims who have recovered 95% of their losses.  By contrast, over 92% of the victims receiving payments in MVF’s first distribution have recovered less than 10% of their fraud losses.

The Plan was expressly intended to reduce the inherent inequities of such dissimilar treatment for individuals who all had their money stolen by the same person.  As explained in the Plan:

“Because the funds available are limited, the MVF will focus on making sure that all victims have received a minimum level of recovery – such as 25% of their loss – before cash is distributed to victims who have already received (or will receive, once the estate’s cash is paid out) 50, 60, 70 or 80% of their losses.”  See FAQ #21 (“Does that mean that if I have recovered funds in the bankruptcy I might not get paid as fast as others?”).

MVF’s “baseline” percentage recovery approach focuses on making sure that victims have all recovered at least a set percentage of their fraud losses.  As MVF’s future payouts occur, the percentage each victim will recover will increase.  As each additional distribution occurs, all approved claimants who have recovered less than each new baseline percentage will be brought up to the new percentage recovery.

MVF has reviewed over 22,000 collateral recovery updates provided by victims who invested through over 1,200 different investment vehicles or schemes, and who have received funds through one or more of over 120 sources of known victim recoveries.   By tracking the range of recoveries among all the investors in a given investment product or fund, MVF has been able to determine when claimants have provided information on recoveries that is consistent with known ranges.  MVF will work with victims who did not provide prior recovery updates in time to participate in this first payout so that they will be able to participate in subsequent payouts.  Certain additional victims with pending recoveries above the 25% threshold have also been held aside from this payout until their situation is clarified.  What’s important is that MVF is paying 24,631 victims today, and will be paying even more victims in the future.

Future Expansion of the Claims Base

In June of 2017, MVF’s website described how MVF would calculate the amount of its first distribution to victims:

“When we are much closer to the date of the first payout, MVF will evaluate all unfinished petitions and outstanding appeals. We will then recommend a first “interim” payout percentage to DOJ that includes reserves sufficient to enable MVF to be able to satisfy every approved petition no matter how the RFRs are resolved. Between now and then, the more RFRs and petitions that are resolved, the lower the reserves MVF might need to retain.”

This is exactly the process that has been underway during the intervening time.  At present MVF is reviewing approximately 4,000 petitions involving over $1 billion where supplemental information has been provided in response to MVF deficiency notices which are still under review.  In addition, MVF has received over 1,260 requests for reconsideration (“RFR”) covering over $10.5 billion in claims.  These are in essence appeals on petitions that were denied.  Further, there are over 7,000 petitions where the claimant has not yet updated MVF on the amount of their prior recoveries.  These petitioners will not generally receive a distribution until the necessary collateral recovery information is provided.

MVF doesn’t yet know what the final dollar amount of approved petitions will be because of outstanding collateral recovery reporting and pending decisions.  We believe that several thousand additional petitions will be approved, and it is possible that that the aggregate approved fraud losses could grow significantly.  This uncertainty regarding the final petition total is not unusual in large claim proceedings.  However, to begin distributing funds now, MVF set its payout of 25% at a level that would provide a significant recovery for victims while also maintaining sufficient reserves so that MVF will be able to pay the same amount to every petition that might be approved in the future.  As the remaining claims and RFRs are finalized, MVF will proceed to make more distributions in 2018.

You Must Update Collateral Recovery Information

As noted above, MVF had to hold payments on over 7,000 petitions that are otherwise approved because the petitioners failed to respond to MVF’s requests that collateral recovery information be updated from what was disclosed when the original claim form was submitted.  We strongly urge every claimant – whether an individual or an organization – to update your recovery information.  MVF cross-checks disclosures made by different investors through the same investment vehicle.  Where a victim’s disclosed prior recoveries are outside the known range of recoveries by similarly-situated investors, MVF may have to suspend that victim’s future payouts.  As we move through the payment process, please send MVF a simple email or other notification to update us if you recover additional amounts.  Feel free to call or email MVF’s Help Desk if you have doubts about whether a specific recovery should be included.

Update Your Prior Recoveries

A Word of Thanks

The payments that MVF is making come from funds obtained by the United States Government through civil and criminal forfeiture actions brought against various people or organizations as a result of the Madoff fraud.  In the aggregate, over $9.5 billion was recovered.  Of this, $5.5 billion helped fund a major portion of bankruptcy distributions to creditors.  The balance of approximately $4.050 billion was then allocated to MVF for distribution to victims through this remission proceeding.

Some crime victims may be perplexed by the intricacies of applicable law governing asset recoveries.  The law is admittedly complex, as different statutory regimes sometimes have quite different standards.  It might seem logical that everyone whose money was stolen by the same person ought to have an equal chance at a recovery, but the interaction of different statutes often creates more complex outcomes.  Fortunately, in this case victims have two different possible avenues for a recovery from government programs.  The fact that each program operates differently has, in the end, produced a recovery that will reach a much broader number of victims.

MVF’s payouts would not have been possible without the extraordinary effort of the men and women of the U.S. Department of Justice.  The U.S. Attorney’s Office for the Southern District of New York, aided by the Federal Bureau of Investigation and other agencies, aggressively prosecuted crimes committed by Madoff and others who were involved with him in different ways. The investigations and lawsuits that they doggedly pursued led to recovery of billions of dollars that might otherwise have slipped away.  Many truly extraordinary people worked to obtain the funds that MVF is now paying out.

Similarly, the Money Laundering and Asset Recovery Section (MLARS) of the Criminal Division of DOJ has worked for several years to oversee and direct the remission process.  The MVF remission process is by far the largest effort to repay victims of a global crime ever undertaken.  Throughout the petition process, the professionals at MLARS have worked with the MVF staff and their colleagues within DOJ to achieve today’s outcome.  DOJ as a whole, and MLARS in particular, deserve thanks from every check recipient for their unwavering determination to identify the victims and help them recover what was stolen from them.

As for MVF, our entire staff is simply thrilled to pay these funds to so many victims, with more to come next year.